She was in last minute essay land, that's where.
In the many moons since last I updated, I have had a panicky time filled with essays, exams and being acutely alone, far from London. I have been making some delightfully complicated socks in order to give my brain a holiday. Progress is slow but here they are thus far- 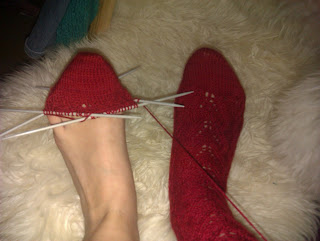 And a little over-exposed detail for you. Please try to notice how they look like cabled hearts with lacey middles. 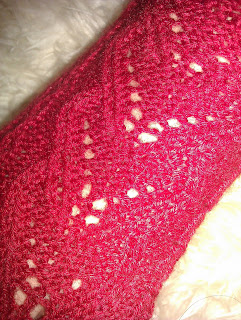 The pattern came free with Knitting Magazine which is THE BEST KNITTER'S MAGAZINE EVER. It has barely any stupid baby patterns, the bare minimum amount of crochet﻿ and some exciting free gifts! So much love for Knitting Magazine.
I also perfected my skull fairisle, and have vague aspirations of making a wee pillow, with pirate material! 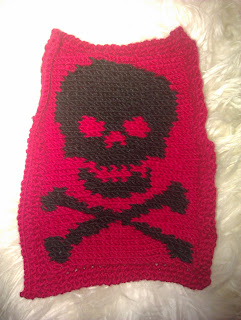 I recently went to Birmingham's patchwork show with my work. Patchworking is yet to posess me, so I just wandered around the stalls looking for wool. I found some! 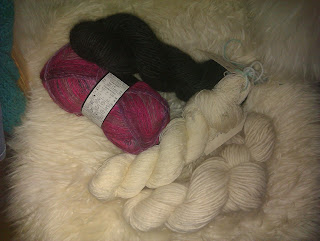 From top to bottom, you are looking at dark grey pure alpaca wool, Noro sock wool in wool and acrylic, blue faced sheep (?) sock wool and white pure alpaca wool. Blue face sheep socks are my next project, I am trawling Ravelry for plans and schemes.
As can only be expected, I have approximately one bajillion projects on the go at the moment. My biggest, yet easiest one is my cape. 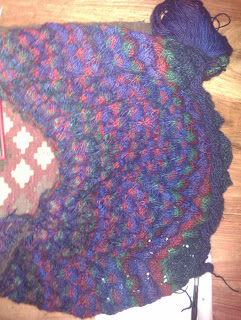 It's from a Knitting magazine pattern, and is made in Tivoli Ocean. The pattern called for four ply but I just said, fuck that shit, I'm using aran. This has not been a mistake. However, this wool is now discontinued and I need another 5 balls so I think I will need to beg the internet for help. It's going to be HELLA WARM.
Finally, I have been working towards getting a dog with my family! Obviously, we need one that can live with cats and the current favourite is Phyllis (my name for her) who comes from a rescue shelter. She is part bulldog, part Staffordshire Terrier, and she looks like this! 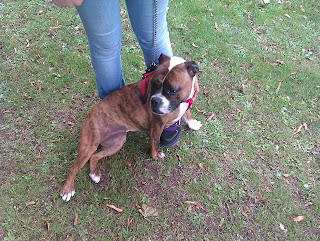 And she is cute like this! She's so well trained and friendly, I love her...but there is lots of paperwork to fill out before we get her. But hopefully, soon she will be blogging with me!
Posted by Kitty Hates Everything at 12:15 3 comments:

I don't want to sound like I'm boasting, but I love my new job. I get to chillax with old ladies all day, drink tea and fondle wool. Sometimes more old ladies come in and talk about their dogs. They give me homework, like making advent calendars, and allow me to take dressmaking courses for free. The only way it could be better would be if I had more hours (or more pay). *Sigh*
I still have a lot of free time and I have used it to tidy up my wool stash-
-and to design and start knitting a wee pirate flag.

The trick is to print a squashed down picture onto squared paper!
I have also been walking the three miles into town a few times per week. I have seen such wonders as this moth that looks more like a goth butterfly than should be allowed-

And the world's most amusing drawing of a horse
It was giving out apples.
Other activities that have prevented me from posting include knitting a cape with Tivoli Ocean silky wool, making gourmet salads and going to weddings. None of these are really excuses but it's so easy to sit in front of the TV knitting. Alas. One of my cats seems to be eating the other one, as one is getting fatter and fatter and the other thinner and thinner, despite their identical diets. They have a feud with a large black cat that has appeared recently and a blackbird/thrush type thing that sits on the fence and PEEP-PEEPS aggressively at them. It's so annoying I have been known to tell it to shut up, and throw things at it. I like birds, but this one is the bird equivalent of a screaming toddler being ignored by its mother. SHUT UP BIRD.
Posted by Kitty Hates Everything at 21:17 2 comments:

So, I have just come back from my first day at my new job...as a haberdasher. I sell material, wool and associated paraphernalia and get 10% off.
It's super fun.
Posted by Kitty Hates Everything at 17:54 2 comments:

Who knew doing nothing was so time consuming?

Since I wrote last, I have been to Cambridge to see a friend (what an awful town it is! It's so small and full of bicycles!), got a job at a haberdashers (they do knitting stuff as well!), become obsessed with shawls-more on that soon, baked more bread and developed a crush on Finn from Adventure Time. I know he's a child but he's also not real so I think it's ok.
Skelly tried an avant garde method of sitting on a chair.

How did I get such a cool cat? I'll never know. I walked into town while it was sunny because I can't afford the bus, what with my old landlord having ALL my money, then £1000 of the bank's money, but I saw a ladybird larva that cheered me up.

It looks like a sweet! But it isn't, it's a baby ladybird.
As I mentioned earlier, I have gone shawl mad. I knitted two in three days before I realised that my lack of a lace pattern was making them look pretty samey. This one is grey angora-
It would look great beaded but the wool is too weak to take it, so I may embroider the beads on. This one is made from Sirdar Click and is waiting to be blocked-﻿
It's very warm! Being back in my parent's house, my stash is all in one place and is being supplemented often by my grandma (her latest gift was about 150g of baby alpaca). I can't fit any of it in my room so it is in my absent sister's room, spreading like a virus
I don't know where else to put it, since I'm in the box room and it would get damp in the garage. Maybe if I could move into my sister's room, seeing as she has moved in with her boyfriend, but no, she needs that room to store books she doesn't read and other stuff she doesn't want. *sigh*
My next stash-busting project is a gift for each of my friend's 3 sons. They're 14, 5 and 6 months so I will get to make a challenging range of gifts. As soon as I have my money back from the landlord I'm buying some cashmerino to make a skully cardigan for a friend/customer (is there any other kind of friend?).
I will try to update more often, but only if I've done something worth telling you about.

Posted by Kitty Hates Everything at 12:34 3 comments:

Creating a tiny world to keep me company

With only the cats and occasionally my Grandma on the phone to talk to, I'm slowly going mad. I have lost the art of saying sentences out loud and am having two lunches instead of dinner. I decided to make myself some friends, because the cats are always asleep and thus no company at all. Here is a pretty slug, who will soon be moving to a new home- 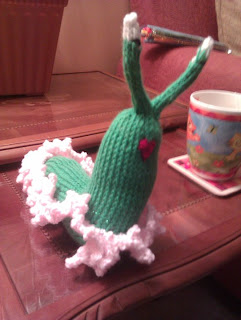 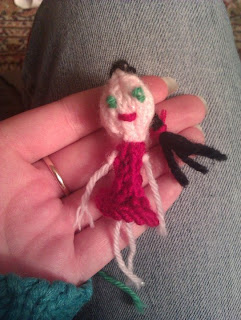 My clothes are against me, and have all become unbearably itchy. David Bowie has invaded my dreams and it won't stop raining.
I have taught myself how to make shawls and am currently churning out a multicoloured orangey purple one. I was originally following a pattern but it is rapidly becoming something a little more free-styley.
See you all soon, unless I go madder.
Posted by Kitty Hates Everything at 12:33 1 comment:

What Inspires My Knitting?